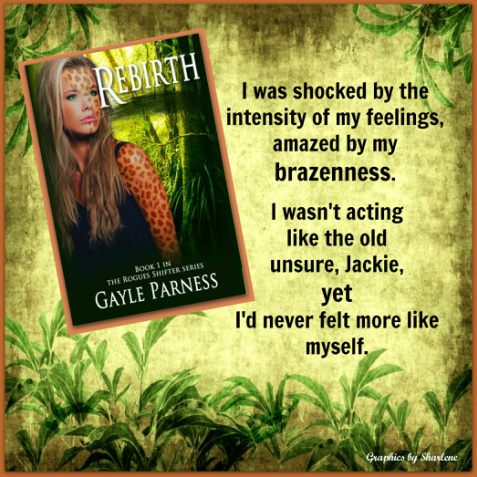 CHAPTERS ONE & TWO
Rebirth is FREE at Barnes and Noble, Smashwords, ibooks, Kobo, and Amazon.
Click here and scroll down to find the links to order the full book

REBIRTH: CHAPTER ONE
I lay unconscious on the damp ground, my body still; my mind untroubled even by dreams. Awareness returned in tiny bits and pieces, each moment a battle fought to free myself from the drug-induced fog. My heart pounded in my chest as I desperately gulped in small quantities of the cold fresh air that burned the back of my dry throat as it traveled to my lungs. Pine needles and rough stones dug into my arms and back as my keen ears caught the sound of an owl screeching out a warning and the distant gurgle of a fast-moving stream. Stars sparkled between the softly groaning oak tree branches as the cool night wind made my eyes water and my body shiver. Pungent scents assaulted me from every direction: the musky forest floor, wood smoke, the sea, a metallic odor: blood…my blood.
The shock jolted me to sit up and stare down at myself.  My arms and hands were covered with splotches of dried blood. The knees
of my black jeans were shredded and bloody; my tee shirt was ripped at the neck and my bare feet were filthy.  I gasped and quickly slapped a hand over my mouth to stifle the sound. Someone had dumped me here, injured and unconscious. They could still be nearby. Wincing, I tried to gulp down my fear and concentrate on forming a plan of some kind.
Unfortunately, the sudden upright movement made my stomach feel like it was competing on the uneven parallel bars and my head pound even harder. I lowered myself gently back to the ground and glared at the stars again, frustrated by my weakness. I swallowed hard to keep from losing my last meal...whenever that was, and shut my eyes to keep the trees from spinning. I guess I could make plans just as well from this position and if sitting up meant vomiting all over myself, I could hang out here on the ground for a little while longer. Anyway, vomiting would only draw the attention of my kidnapper, since it was impossible to barf quietly.
As my stomach settled down again, I took in some slow deep breaths and inspected my hands once  more. There were no cuts or scrapes anywhere to be found, although that was definitely blood I smelled. They were sore, as were my feet, but I'd have to worry about getting to a doctor later. Still, a tiny voice in my head suggested that I could be suffering from shock and that the pain from any hidden injuries would probably kick in soon. Sometimes I felt like duct-taping that tiny mouth shut. I closed my eyes, exhausted and afraid, and shivered in the cool air.

“Where are you running, sweetheart?”The large man with the hooded sweatshirt and the rough voice held me tightly as his friend laughed, a low and husky sound, filled with the promise of pain. I struggled, but they dragged me off the park’s walkway and into the trees. The scrawny one held a knife to my throat.


The two-year-old memory slammed into my vulnerable mind in a rush of terror. Shit...this wasn't  good. After six months of therapy, I'd pretty much thought that my panic attacks were over. Maybe whatever drug I'd been given had lowered my defenses. I shook my head and rubbed my face in another effort to clear my head. Determined to take back control, I tried to focus my mind on what had happened earlier this evening; desperate to discover a clue as to how I got here.
The last day I remembered was Sunday, May 2nd. I'd ridden my bike from my current hometown of Cloverdale, California to Asti and back, stopping only once around 1:00 PM at Claude’s Cafe to grab a quick bite and another water bottle.  I’d been relieved that the headache I'd had all day had lessened with the strenuous exercise. Still, by 7:00 PM I was glad to be back at home shoving my bike into the storage shed in the side yard and locking it securely. My adopted parents had bought it for me as an early birthday/graduation present and so I'd been careful to secure the
lock. Riding on the familiar back trails that took me whizzing past ancient redwoods and amazing vistas had been cathartic, and so even though my muscles were tired and a sore, I’d felt pretty good.
There was a man I didn’t recognize sitting on my neighbor’s porch steps and I recalled finding it strange, because the Reynolds had left for vacation the day before.  He stood when I passed and smiled at me, so I’d smiled back automatically to be polite. He was tall, with wavy dark hair that hung below his collar and very dark eyes. He was dressed in coveralls and I remembered thinking that maybe he was hired by the Reynolds to do some yard work while they were gone. Still, I’d felt uneasy seeing him there on their porch.  If he was hired to work why wasn’t he working? And how much yard or construction work is done at night?  Shrugging off my uneasiness, I’d turned away and headed toward my door. Stupid move.
My squeaky gate sounded its usual protest as I walked up the gravel path to the side entrance of the house I shared with my mom and dad.  As I was putting the key into the lock, the air behind me stirred and a pungent wintergreen scent filled my nostrils. A Muscular arm wrapped around my waist and a calloused hand covered my mouth. I’d struggled briefly but couldn’t call out other than to mumble a frightened grunt. There was a sharp pain in my neck and then nothing else.
Still sprawled out flat on the forest floor, I shuddered again. He'd drugged me and taken me...somewhere...but where? I listened intently but couldn’t hear any human movement nearby, only a variety of squeaks and squawks, scratching and scurrying by the local smaller inhabitants. Those creatures didn't bother me. It was the human variety that concerned me at the moment.
I was so angry at myself I could scream.  A stranger on my neighbor’s porch should have set off alarms in my head. I tried to think about what I should do next, but fear made my heart jump around in my chest. I dug my nails into my palms. Think, dumbass. Getting to the nearest road was an option, but I didn’t know where I was or even if there was a road nearby. Though I listened as carefully as I could for the hum of passing cars , no engine noise cut through the forest. I could try to make it to that stream I'd heard and follow it. Maybe it would lead me to a campground or a town.
Of course, to accomplish any of that I had to stand up. I shivered again, thinking about my recent attempt.  Although the nausea seemed to have disappeared, I was desperately cold and thirsty. Whoever had attacked me must have left me for dead out here in the woods. What had he wanted?  Thinking about him made me tremble again, but I knew better than most that panic was my enemy as much as the stranger was.

"Where are you running, sweetheart?” Their breath smelled of  cigarettes and beer.

TWO
We walked into a cozy room with multi colored rugs and an old, comfy looking couch decorated with pillows and throws. A well worn armchair sat near a lit fireplace, the flames lighting up the walls with dancing shadows. There was a lingering musty odor which was mixed with the comforting smell of home cooked meals.  He handed me a sports-sized water bottle and then pointed toward a narrow hallway to the left.
“Your room is the second door on the right. Do you think you can make it?" I nodded. "There’s a bag of clothes on the bed and a bathroom attached with clean towels on the shelf.” I didn’t move. “Go on, kid. No one will bother you. Don’t try to run. There’s really nowhere to go.” I still hesitated. He smiled and tried to sound reassuring. “I’m not going to hurt you. I’m going to make you something to eat and then explain everything. Go ahead.” He turned away and headed for the small kitchen to the right, opening the fridge and getting out a few bags.
Stumbling through the door he’d indicated, I locked it behind me, and then slowly forced my shaky body to head into the small bathroom. I locked that door as well, then quickly stripped and showered. My need to wash away the blood and warm up under the hot water, took precedence over my fear, and I needed to see where I was injured and clean any wounds. The heat brought my body temperature back to normal and the fresh bar of soap cleaned me up quickly, making me smell human again.  I washed and shampooed, getting every bit of the blood and mud out of my hair and off of my hands, then dried myself and looked around.  The window was definitely big enough for me to fit through, but I was too
weak to make a serious attempt at an escape.
Wrapped in the green towel, I stood in front of the full length mirror in the small bathroom and examined myself.  Strangely, not one cut or scrape marred my skin, not even a bruise.  Even more alarming, the scars that had decorated my body for the past two and a half years had disappeared as
well.

Car doors slamming and then two sets of feet rushing toward me.
“Where are you running, sweetheart?” Off the path and hidden by trees, a rag
shoved in my mouth. A hand stroking my hair…moving toward my breast.
“So pretty.”