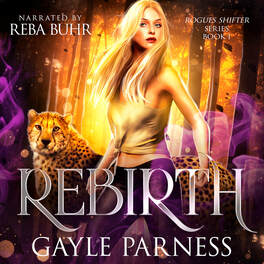 Book 1: Jackie Crawford never felt human. Mystery solved.
My senses are sharp, my body is sleek, my speed is turbo powered. Shifter. I’m a shifter. A creature I didn’t know existed until a few days ago. Two forms, one mind, a magical being. Everything finally makes sense.

As I settle into my supernatural self, my human half is growing stronger alongside my beautiful animal. Danger stalks this unfamiliar world – fae, vampire, wolf, witch - and as it is with humans, not every strange creature is evil. Garrett, my vampire trainer, has placed me with a team of rogue shifters, teaching me to fight, to use my magic to protect, to be all that I was meant to be. Ley line energy fuels my spirit along with my magic. I’ve survived worse. I can do this. Bring it on.

Garrett becomes my biggest challenge, but he and his secrets don’t stand a chance against this determined cheetah. 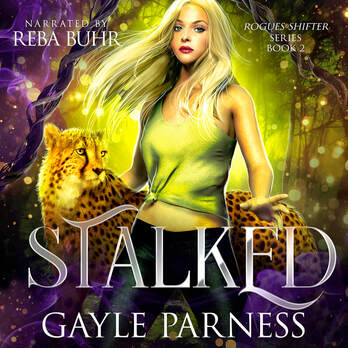 Book 2: A trip to Faerie turns into a nightmare when Jackie catches the eye of a dangerous creature.

I’ve left school behind as well as my adoptive family, but I was never meant to live life in their world. I’m a shifter now, a healer, a powerful creature with abilities I can use to protect myself and the innocents of this newly discovered world. I’ve found love with Garrett and am part of a team. I belong here. I fit here.

Summer Solstice in Faerie should be a time of celebration. A time to dance and sing and glory in creation. The fae of Cascade have welcomed me with open arms, made me an official ally. But I’ve made a terrible mistake. Now I fear for my life and the lives of my team members.

But work goes on and our team is on its first important mission. I won’t let any of them down.

“…just enough political intrigue to keep you thinking, plenty of character development, and enough of the relationship
stuff…to feed your inner romantic without being absurd.”  Amazon Reviewer 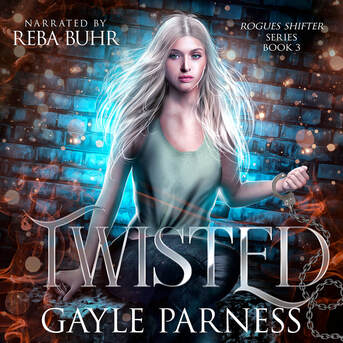 Book 3: As the Rogues Team searches for Jackie, an unexpected ally helps her plan her escape.
Jackie, a magically gifted cheetah shapeshifter, is the prisoner of a powerful fae lord who wants her to bear his child. But Jackie has a lifemate she adores, and will fight with tooth and claw, never agreeing to submit.

Garrett, her mate, is searching for Jackie with the help of his team of vampires, shifters and fae. But the clues are misleading and Garrett is afraid the worst may happen.

When someone unexpected appears, holding the key to her freedom, Jackie may have to make a dangerous bargain that might impact her future for years to come.
Twisted - Audible
Twisted - apple 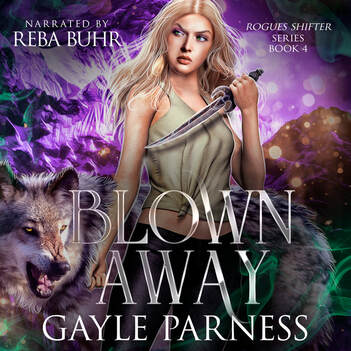 Book 4: Jackie thought the worst was over, but the team is in danger and so may be her most important alliance.Jackie: Our team is hunting for three missing teens, but the werewolf Alpha and his family aren’t cooperating. Blood Magic is at work in a place where magic isn’t allowed and now the youngest son of the Alpha has threatened us. An attack seems imminent.
To make matters worse, Garrett is now in charge of a large territory and dealing with a rebellious master vampire. I’ve been asked to help heal a young lion shifter who’s resorted to violence. Home and quiet time together is looking better and better.
But when my closest fae friend unlocks my memories once again, I have to come face to face with an unexpected situation that could destroy my relationship with Garrett and may even start a war with Faerie.
“Such intricacy and depth I forget these people aren't real!” Amazon Reviewer
“Romance, action, laughter, everything you could ask for in a group of novels.” Amazon Reviewer
Blown Away - Audible
Blown Away - Apple 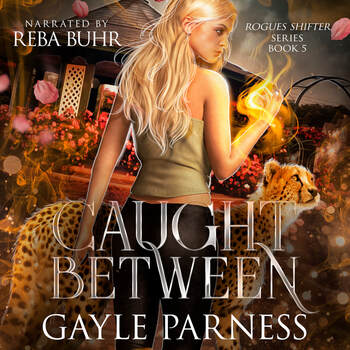 Book 5 - Jackie and Garrett travel to his maker's old villa in Carmel, CA  where he tries to  face down the demons of his past. With the help of an unexpected and unwelcome guest and also a lovely surprise, Jackie is able to help Garrett
find the peace he longs for.

But as soon as they're back at home, the usual craziness kicks in. The Rogues, Inc. team is called  into action to help solve two local murders, plus Jackie is forced to confront her most hated  enemy as he's judged before the Elders of Faerie.

Finally, a wantonly violent act threatens to tear apart her family,
leaving her once again  determined to protect the people she loves
​with her magic and her strength.
Caught Between - Audible
Caught Between - Apple 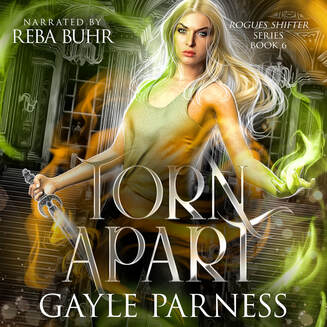 Book 6 - Five years have passed. Jackie, a young cheetah shapeshifter,  and Garrett, her vampire lifemate, are trying to deal with the usual   problems faced by any new parents. Even those with supernatural   powers.

However their son, Charlie, was born with a rare bloodline, a cross   between  two warring supernatural groups, fae and demon, both sides   planning to use   him as a pawn in their impending war. Because of the   prophesy regarding the   role he plays in the war, he's guarded by   warriors and demi-fey, watched by fae lords, and slotted to be trained   throughout his life to use every weapon at his disposal to protect   himself, his family and his allies.
​
Jackie knows it isn't enough. In her usual style, she takes it upon herself to keep her son safe, even if it means spending time in a realm far from the family she loves, angering the males she's pledged her life to protect.​
Torn Apart - Audible
Torn Apart - Apple
NEW COVERS COMING SOON! 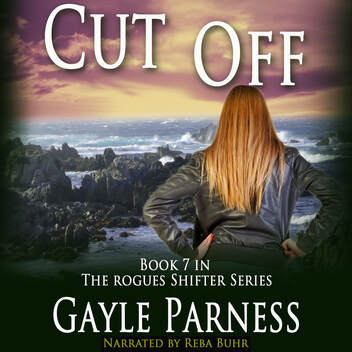 Garrett's gone, and Jackie's in charge.

Book 7 - The letter from the Queen of Faerie was a threat. Garrett will die
if I fail to deliver my son to the Faerie Court.
I don't respond well to threats.
My closest friends are urging me to do something that goes against
all my instincts. Instincts were put there for a reason, right?
I'm going with my gut, even knowing what will follow.
My fae allies will be furious. I may lose their support.
My teenaged son will demand we rescue his dad immediately.
Isaiah will rant and rave when he finds out what I have planned.
Garrett will pray that I don't put myself in danger and come to rescue him.
Alpha males are so predictable.
Good thing I'm an alpha female.

Cut Off - Audible
Cut Off - Apple
RE: The Rogues Shifter Series timeline. Blood Spelled takes place after Breaking Out and Falling Out, books 1 & 2 in the Triad Series. Even if you haven't read those books it will not affect your ability to enjoy and understand what's going on in Blood Spelled. 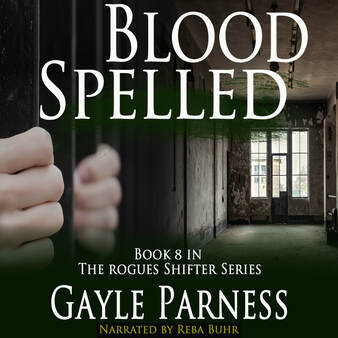 Book 8: A spell cast to divide and conquer.

JACKIE: My son Charlie and my mate Garrett are
determined to keep me safe, only I'm perfectly capable of
taking care of myself. My cheetah and demon magic has blended and proven its worth. I won't stand aside when
war is upon us.

But members of a vicious coven have taken me from my
home. I must find a way to escape, to save
the innocent victims they've been using for their
experiments in mind control.

Only a powerful female creature I have no ability to
influence wants my blood to work a spell. To save livesI'll have to agree. But the spell may be more than she's let on. More than I can bear. 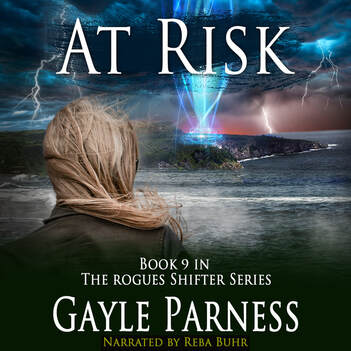 Book 9   The Archdemon's Deal: The Realm of Faerie will have one   thousand years of peace. The Price: Hand over Charlie Cuvier,   the magically powerful young male prophesied to defeat her.
Charlie: She wants my blood, but I know she'll attack the fae   even if I surrender willingly. This is my last chance to call   together my allies, to turn them into an army that can defend   my  home realm. If only I didn't have to travel to the   archdemon's territory to do it.
Jackie:Our son will not be sacrificed in a bargain no sane person would trust. With half our allies turning against us, my mate and our team will protect our friends, our homes and the innocent victims of a supernatural war. We've worked too hard to surrender. Now it's time to show our enemies what it means to be a rogue.

But a determined archdemon can dissolve even the strongest glue.
At Risk - Audible
At Risk - Apple
Proudly powered by Weebly