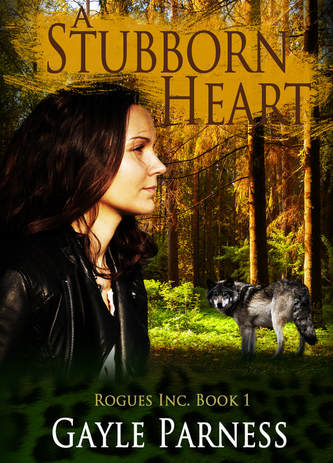 A Stubborn Heart - Book 1
Despite an early trauma, Sinc had made a good life for herself with the Rogues Inc. Team - until the day her world exploded and everything she'd worked so hard for came crashing down around her. Now she has to start over, learn how to cope with a devastating injury, maybe even lose her place on the team.
To add fuel to the fire, the former love of her life is back to haunt her dreams, and old feelings are coming alive despite the hurt she's lived with for the past twelve years.
Opening her heart to Gabe would be the worst mistake ever.

Gabriel, the son of the Los Altos alpha, could have done something to stop the tragedy that caused Sinc's injury, only his decision to do the right thing came too late.  Now he's on the bottom rung in a new pack, fighting with every ounce of his strength to make a place for himself among strangers.
But when his first love, Sinc, arrives to testify against his family, the
wolves who hurt her, Gabe yearns for a second chance to win her heart, even though he knows he doesn't deserve it.
A Stubborn Heart is a paranormal romance with the same heat level as
the Rogues Shifter Series.
$0.99 on sale
$2.99 beginning May 30th
Do you have a favorite Rogues Inc. or Triad Series team member?

Leave a message on my Contact Page to vote for

the character you want me to feature in future Rogues Inc books.

Ethan, our cougar shifter, will be my star in book 2, but I'll be writing
​
more in this series.

or someone else?
​
Proudly powered by Weebly